1. Which book would you consider the best book you’ve ever read and why?
I have to say Frankenstein.  I actually devoted a number of years of my life to studying Romanticism, and Mary Shelley in particular, and I do really love that book.  It comes at a crucial juncture in literature and just does everything I want it to.  Plus, I'm such a sucker for that tortured antihero, the Creature.  I feel for him a lot.

2. Are you an Austen person or a Bronte person?
Austen. Though I did like Jane Eyre, Heathcliff really bothered me.  Austen's novels you can just read over and over.

3. Are there any genres you will not read?
I don't think so... one thing I did was form a book club that reads one non-fiction book a month that is written by a woman.  In this way I have weaned myself onto reading non-fiction and I quite enjoy it.  I have never really gotten into popular fiction... it's not that I won't read it, I just don't.

4. Are you a fast or slow reader?
FAST. Especially with my fanfic habit, I read literally thousands of words every day.

5. What was your relationship with books like as a child?
All the books, all the time.

6. Are you the type of person who will read a book to the end whether you like it or not, or will you put it down straight away if you’re not feeling into it?
I try to read to the end. With certain kinds of books I only read a page or two a day (meditative, religious, or philosophical books). Some books I will pick up and read the ending first and then read backwards. The most recent book I dabbled in was Byzantium Endures by Michael Moorcock. Fun title, interesting back cover, boring inside. No dice. Back to the "little library" it goes! (Had recently scored a really fun Moorcock short story compendium from the same source!)

7. Have you ever despised  something you have read?
Yes. Novelizations of movies I like, or authorized novels, can infuriate me.  This is why I read fanfic instead.

8. Do you prefer to read first person or third person?
I mean, first person can be very fun.  I do read memoir, so that is nearly always first person.

9. Are you for or against multiple narrators in the same book?
for

10. Bookmarks, dog ears or leaving the novel open and face down to keep your spot?
I do all the things, but I hate to break the spine!

11. Do you prefer to read at a certain time of day?
ALL THE TIME.

12. Do you need to finish a book before you can move on to the next one, or will you have multiple books going at once?
Multiples.

13. How do you choose which book to read next?
the blurb, or, I go seeking a book about a particular topic or by a particular author.

14. What is your favorite childrens’ book?
Ozma of Oz; The Cricket in Times Square; One Fish Two Fish Red Fish Blue Fish; Winnie the Pooh; I am a Bunny by Ole Risom and Richard Scarry;

15. Do you agree that Jane Eyre should be considered a feminist novel?
no; though I do think the Bronte's thought of themselves as feminists

17. Do you know any poetry by heart?
Terrible at remembering poetry; never stops me trying!

18. Did you enjoy the Hunger Games?
nah

19. E-reader or traditional book?
Both.

20. Do you read in the bathroom?
yes; I have a whole basket of bathroom books that I swap out

22. Hardcover or paperback?
paper (not enough room for Hardcovers)

25. Do you enjoy concepts in books to be concrete or abstract?
No one understands this question.  I do think the best books usually have an unstated theme that rises above the narrative.

26. A book you studied in school and ended up loving?
Moll Flanders.  Surprisingly riveting!

7. Classics or modern literature?
Getting a PhD in literature ruined me for most fiction.  Fanfic is my preference now.

28. Thoughts on adults reading YA?
YA is just a publisher's distinction. Telling a good story doesn't have an age range.

29. Have you ever read a book in another language?
I read a little French and a little Hebrew .... I try to read verses in the Bible in their original languages, but I certainly haven't read the whole thing that way!

30. Have you ever written your own book?
Yes, several times.  :D

The Griffin school was high in the mountains, so high, they said, that sometimes the keep was wreathed in cloud by day, and sometimes by fire at night.

Sometimes the face of their god passed by, a god the Griffins would not call by name, a god they called simply, the Highest.

The people who had fallen together into this world — elves, dwarves, humans, and others — brought their gods with them, and little else.

Elves had fallen here first — the chaos magic of the world felt natural to them. Dryads, dragons — these were elder siblings. Magic flowed into the elves like air, into dryads like water, into dragons like fire.

Humans, made of clay (so the Griffins’ oldest stories told) could barely feel the magic flow. They ground it up in powders, distilled it into liquors, and trapped it inside metal and stone. It hurt the others to feel the chaos caged, and wherever humans settled, monsters gathered, drawn to the wound in the world the humans carved with their cravings and fears, their knives and their lusts.

Monsters gathered, glutted on humans, propagated faster than slow human hands could rebuff them. Elves and dryads and dragons fled to their fastnesses, fearing the hatred humans unleashed onto all they did not understand.

Humans were left alone with the monsters, until they begin to breed mages — humans for whom the dire costs of chaos were palpable, malleable, coin they knew how to trade in.

Mages sacrificed the lives of the young for the few who survived, those who survived the dreadful first deaths, to live on, faster (yet slower of heart), stronger (yet stranger), better (yet somehow, undeniably worse). Monsters to fight monsters, the mages reckoned.

The Griffins knew better. Knowing themselves, they knew mages had not made them, not really. The Highest had called them into being, mixing human clay with holy fire and sacred breath. They did not know the name of their god (not Freya, not Melitele, and certainly not the cruel Flame), but they knew their purpose.

“This country is desolate, burned with fire: monsters devour it in your presence, overthrown by monsters. The destruction of foul creatures shall be for us, and we will purge away the dross, We will learn to do well, seek justice, relieve the orphan, and fight on the victim’s behalf.”

Griffins turned the tide with their inviolable code. They fought not out of duty or because their mages cursed them into being, but because they walked in righteousness.

After the mages brought down their keep in a thunder of ice and stone, the last Griffin standing was Coën, who bore an ancient name, a name of honor. When he saved, he gave thanks; when he slew, he set up stones and poured out oil and wine as an offering.

Coën was a Witcher, a mighty hunter before his god, and this shall be his song. 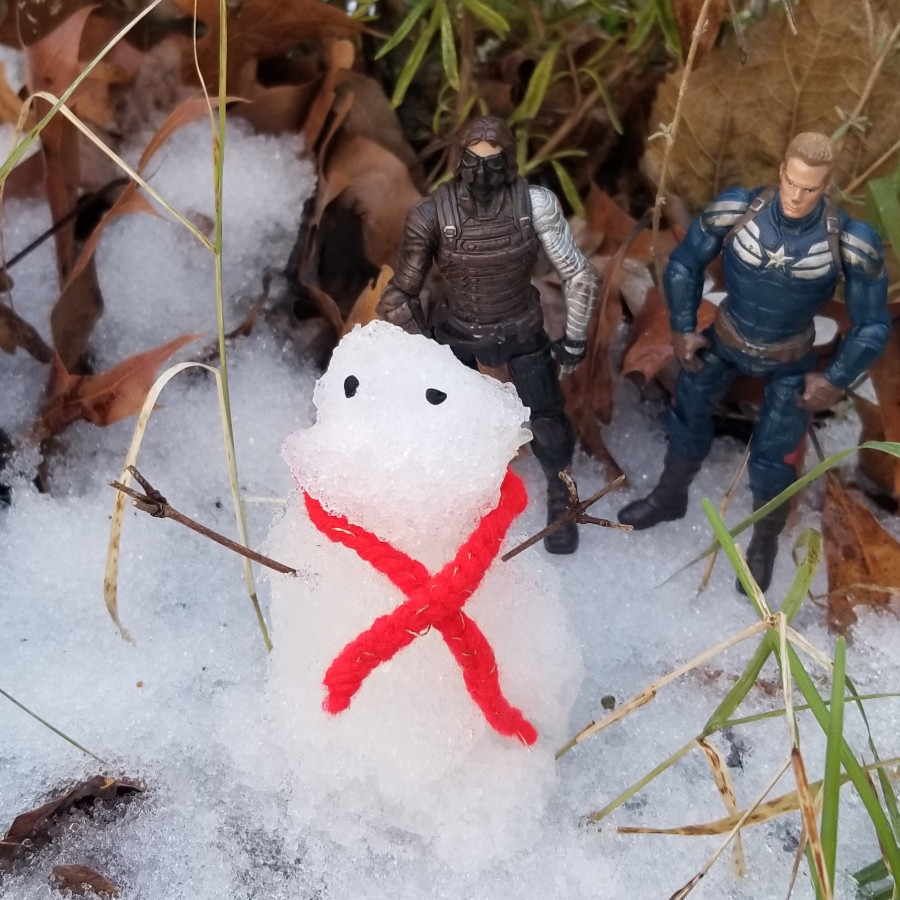 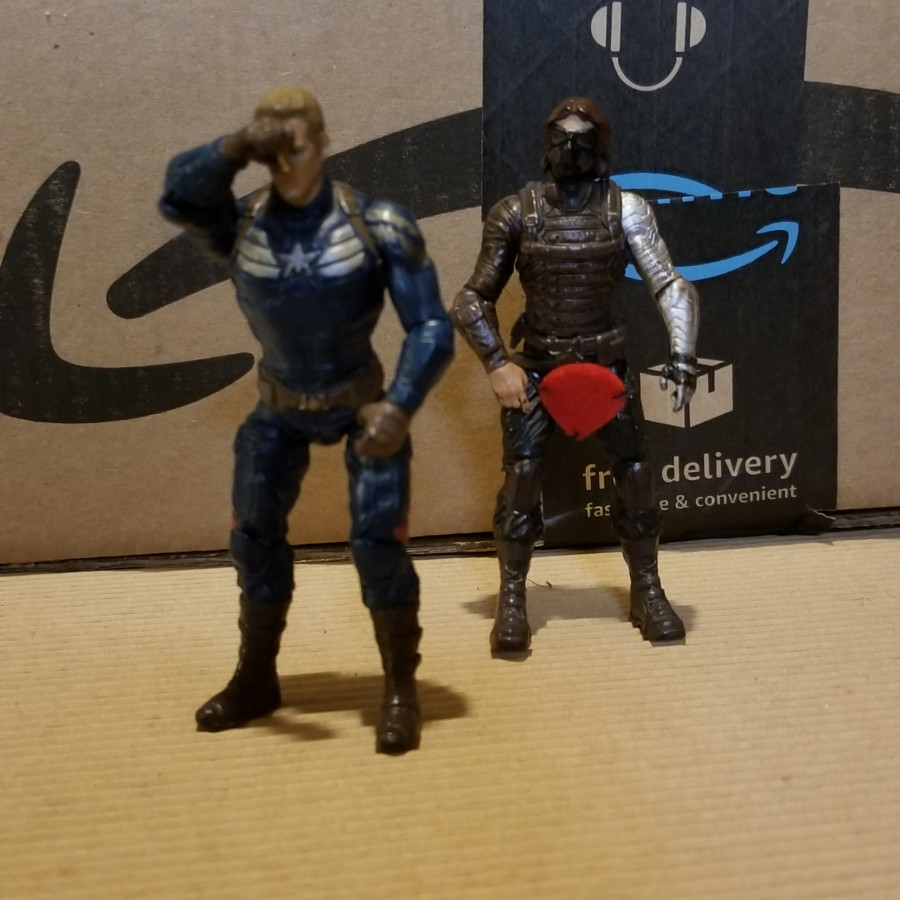 Bucky! That's not what they meant!!!

B: Steve, what is this place?

S: I don’t like it either, Buck. But are we gonna just leave all these …others… trapped in jars?

B: No tellin what might happen if we let em out.

S: But look — who are these guys? Are they us? Or alternate versions of us? If we let em out, will it implode the space time continuum or something?

S: I think we should let em out.

B: Can we at least break the jars from a distance?

B: Caution is the better part of valor!

S: This time I’ll have to agree with you.

I'm not sure that's what they meant by National Flossing Day!

Buck, you're a whole lot a man
Just take a look at your great big hands
You know you can crush poor me in two
But gentle, oh so gentle are the things you do

I, um, I'm sorry Buck.  I just, sardines are not really my thing.

But they're so good!  Even in Russia, they were good.  Yum.

Well, can't argue with that. More for me I guess! 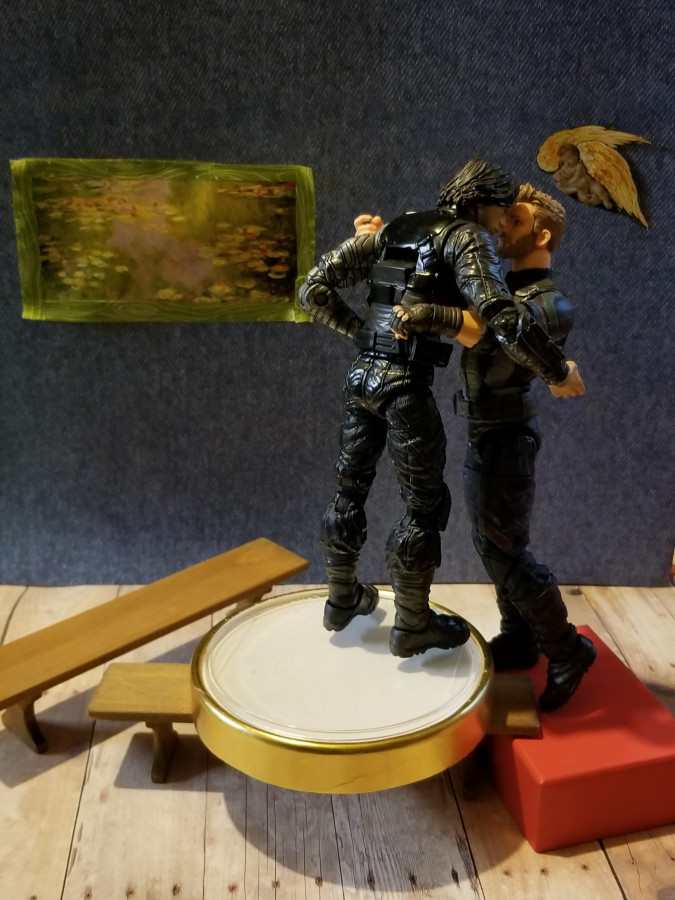